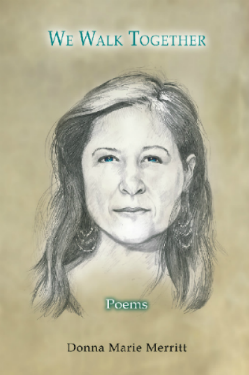 Donna Marie Merritt's fifth book of poetry began with an encounter with a homeless man. He was standing on the side of the road with a sign for food. She passed him, but it nagged at her and she turned the car around and asked if he would like a poetry book. His eyes lit up and he nodded yes. She watched that man walk away absorbed in the book and she realized she'd never know why he was homeless or what his thoughts were.

That encounter resulted in twenty-two new poems that have been described as "drops of conscience." Each poem seeks to look at a situation through someone else's eyes. Her poems feature troubled students, homeless people, mothers and wives, objects such as an old door washed up on the shore or a cherry tree damaged in a storm, and individuals of all kinds in moments of panic or confusion. Many poems focus on a single act of kindness from a stranger with Merritt gently pointing out how one such act can make all the difference in the world to a person.

As in her other books of poetry, Merritt’s poems radiate with empathy and compassion.

“In We Walk Together, Donna Marie Merritt blurs the boundaries between self and other. …Deeply human and humane, these poems provide a glimmer of hope in a world buffeted with disheartening news.” -Ginny Lowe Connors, author of The Unparalleled Beauty of a Crooked Line

“Merritt takes on the world with these poems – with deep passion, pity, and something more. She is a committed poet who understands life, and whose poems will endure.” –David Kherdian, author of Root River Return 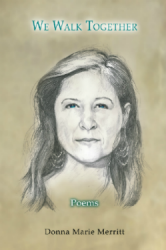